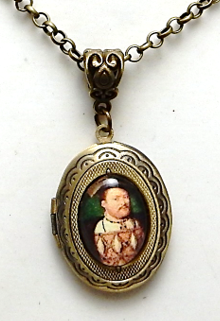 Henry VIII (28 June 1491 – 28 January 1547) was King of England from 1509 until his death in 1547. Henry is best known for his six marriages, and, in particular, his efforts to have his first marriage (to Catherine of Aragon) annulled. His disagreement with Pope Clement VII on the question of such an annulment led Henry to initiate the English Reformation, separating the Church of England from papal authority. He appointed himself the Supreme Head of the Church of England and dissolved convents and monasteries, for which he was excommunicated.

I have made the portrait of Henry into a 13 x 18 mm glass oval. This is then set onto the locket which opens to reveal a quote inside, it reads:

I love and shall, until I die.

So God be pleased, thus live will I."

The locket is set on an 18 inch bronze belcher chain and will come in my gift box.