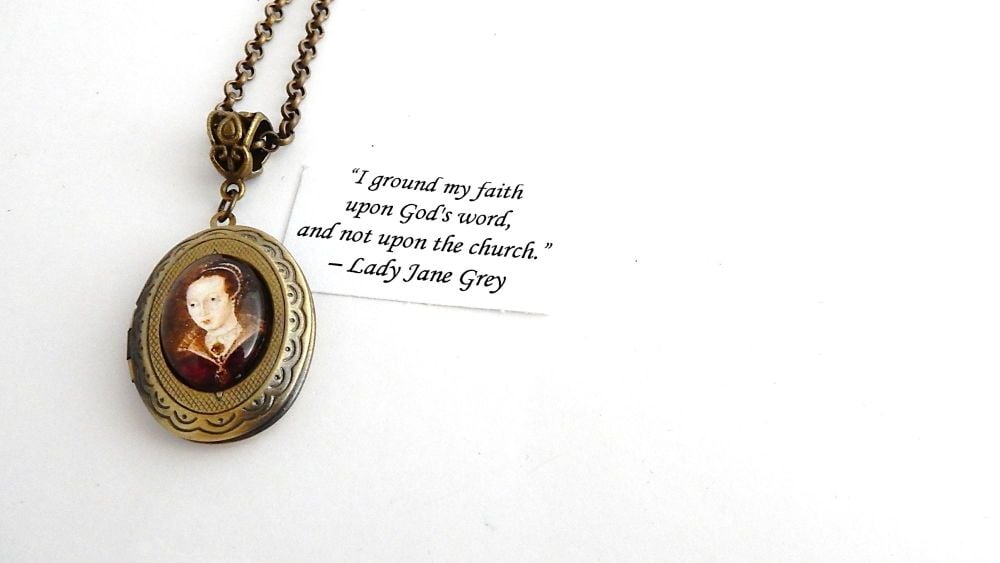 Lady Jane Grey (c. 1537 – 12 February 1554), also known as "the Nine Days' Queen", was an English noblewoman and Queen of England and Ireland from 10 July until 19 July 1553. Jane was the great-granddaughter of Henry VII through his younger daughter Mary, and was a first cousin once removed of Edward VI. In June 1553, Edward VI wrote his will, nominating Jane and her male heirs as successors to the Crown, in part because his half-sister Mary was Roman Catholic, while Jane was a committed Protestant and would support the reformed Church of England. After Edward's death, Jane was proclaimed queen on 10 July 1553. However support for Mary grew very quickly, and most of Jane's supporters abandoned her. The Privy Council of England suddenly changed sides and proclaimed Mary as queen on 19 July 1553, deposing Jane. Jane was executed on 12 February 1554.

I have made a portrait of Jane into a 13 x 18 mm glass oval. This is then set onto the locket which opens to reveal a quote which reads:

“I ground my faith
upon God's word,
and not upon the church.”
– Lady Jane Grey

The locket is set on an 18 inch bronze belcher chain.

The necklace will come in my gift box.