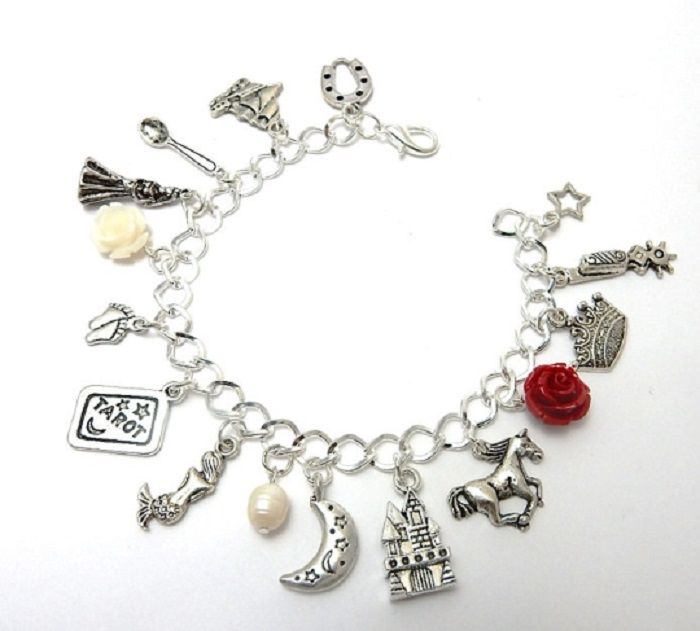 This beautiful hand crafted charm bracelet is part of my historical jewellery range to commemorate Jacquetta Of Luxembourg, Lady Of The Rivers. It links with my folklore and mythical range through the River's connection to the legend of Melusina.

Jacquetta of Luxembourg, Countess Rivers (1415/1416 – 30 May 1472) was the eldest daughter of Peter I of Luxembourg, Count of Saint-Pol, Conversano and Brienne and his wife Margaret of Baux. She was a prominent, though often overlooked, figure in the Wars of the Roses. Through her short-lived first marriage to the Duke of Bedford, brother of King Henry V, she was firmly allied to the House of Lancaster. However, following the emphatic Lancastrian defeat at the Battle of Towton, she and her second husband Richard Woodville sided closely with the House of York. Three years after the battle and the accession of Edward IV of England, Jacquetta's eldest daughter Elizabeth Woodville married him and became Queen consort of England. Jacquetta bore Woodville 14 children and stood trial on charges of witchcraft, for which she was exonerated.

In the bracelet I include the red rose of Lancaster and the white rose to represent Jacquetta's allegiance to the House of York.

There is a mermaid charm to represent the water Goddess Melusina. Jacquetta believed the ancestry of the Rivers traced back to the mythical Melusina, half woman, half fish, who tried to love a human man.

There is a baby feet charm to represent Jacquetta's motherhood.

There is a bride charm to represent Jacquetta's marriage to the Duke of Bedford and later to Richard Woodville. There is a castle, a crown, and a spoon. The spurs, horse and ship represent the travels Jacquetta underwent and the moon, tarot card and star add a hint of witchcraft. The horseshoe is a hint to the Queen Margaret of Anjou riding on her horse with the horseshoe on backwards. There is also a freshwater pearl.

The bracelet measures 7.5 cm but is adjustable as you can attach the lobster clasp to any of the links. It comes in a box.