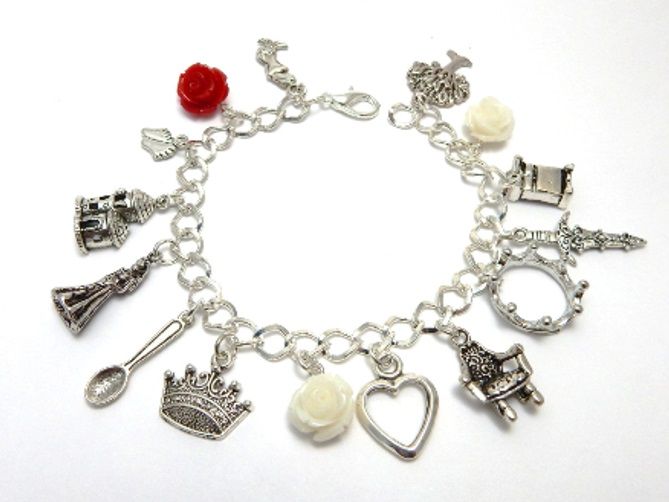 This beautiful hand crafted charm bracelet is part of my historical jewellery range to commemorate Elizabeth Woodville, 'The White Queen'.

Elizabeth was married to King Edward IV of England in 1464. Amidst the turbulent times of The War Of The Roses, where the houses of Lancaster and York fought for the right to the throne. Elizabeth was the Queen of England, a wife and a mother. It was Elizabeth's two sons who became the infamous 'Princes in The Tower'.

For this bracelet I have chosen several charms to represent Elizabeth. There is a red rose of Lancaster as Elizabeth's family were originally Lancastrians and two white roses to show her allegiance to the House of York.

There is a mermaid charm to represent the water Goddess Melusina. Elizabeth's mother, Jacquetta, believed the ancestry of the Rivers traced back to the mythical Melusina.

There is a baby feet charm to represent Elizabeth's motherhood, and a spoon which represents the spoon she pulls from the water, believing it to be a sign that she will have a son and heir to the throne, Edward.

There is a bride charm to represent Elizabeth's secret marriage and an oak tree charm as Elizabeth first met Edward under the oak tree. The dagger in the sheath charm is for the dagger Elizabeth turned on herself to refuse Edward's advances. There is a crown ring and a heart to represent their marriage for love. The bed charm represents the passion of their relationship.

There is a second crown and a throne, and a Tower of London charm for the 'Princes in The Tower'.

The bracelet measures 7.5 inches in total but it is adjustable as you can attach the lobster clasp to any of the links. It comes in a pretty box